Gregorio Giorgetti Is a Venetian engineer who started his passion in powerboating at the age of twelve, when he first attended a powerboating championship. Gregorio was raised in Venice in a family that has a long tradition of powerboats drivers spanning three generations. His father introduced him to powerboat racing back in 1994.

Despite he quickly proved his talent, by winning two championships in two different racing categories for two consecutive years, in 1995 and 1996, Gregorio had to dedicate his attention to his scholar education. 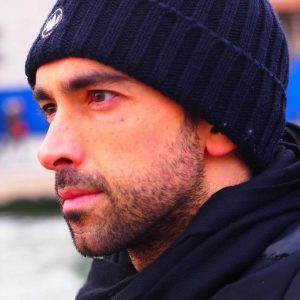 He attended the Istituto Tecnico Nautico duca di Genova in Trieste, where he obtained his high school degree as as “Perito Tecnico per le Costruzioni Navali”. His education continued at the Solent University in Southampton (UK), where he graduated with an Engineering Degree in Yacht and Powercraft Design. He subsequently became a member of the Royal Institute of Naval Architects.

But his passion was beating strong and even if his life was mainly focused on his education and his work, he never left the racing field and approached various categories inshore and offshore every time he had the chance to. Back in 2007 he was awarded athlete of the year from the Venetian City Council for attending the Italian and the European championship in the O250 inshore category. Few years later, he managed to make his dream come true by co-piloting an offshore Class 3C that he designed and built for a client.

Straight out of University he started working as a Project Manager at the CRN yard in Ancona and subsequently for his family’s firm, the Studio Tecnico Navale Giorgetti. Meanwhile back in 2010 he started a side project together with his brother Mentore, to produce a recreational powercraft that have been developed ever since, allowing to test the hull with various layouts and engine configurations.